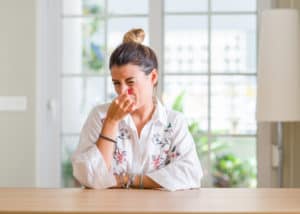 Air purifiers significantly reduce the presence of certain contaminants and viruses in enclosed spaces, and can definitely help with certain respiratory issues. It’s therefore not a surprise that they have become a staple for many homeowners who are serious about creating a healthy atmosphere in their homes.

However, as with most products, air purifiers can also come with a few downsides, and the fact they can sometimes start to smell after a while is one of them. Although we usually buy them to clear our air of bad smells, they can be the cause of bad odors too. But what are the causes of such unexpected smells?

When Did Your Air Purifier Start to Smell?

A purifier can emit unwanted smells for various reasons. It can occur right after you first open it, the first time you turn it on, after prolonged use, or even after you’ve been using it for a short period of time.

Some purifiers may smell weird right when they come out of the box. This may be the famous “new appliance” smell. However, if you’ve bought it second hand, the reason behind the smell may be the used filters.

If the purifier emits unexpected scents when it’s on, it could also be traced back to the production process (or the previous owners in case of a second-hand purchase). There are different unexpected smells that may stem from your air purifier during use, and they range from pleasant, to weird, to outright bad-smelling.

How Does Your Air Purifier Smell?

In case your purifier emits a nice but unexpected smell – and you didn’t order an aromatic purifier – it’s usually because the product has a carbon filter. If you get this smell, chances are the carbon filter is doing its job and nothing’s wrong. On the other hand, this smell can also be an indicator of whether or not it’s time to replace your carbon filter, too – if the smell is gone, it’s probably time for a new filter.

Your air purifier can often emit the smell of damp air or chlorine (a smell similar to the smell of a swimming pool). The main reason for this is that some air purifiers also use ionizers to help them clean the air. Ionization, however, releases ozone as a byproduct. Ozone is a gas that has been described to smell as “the fresh air after a rainstorm”.

In other cases, users have also complained about a “wet dog” smell. Dogs have certain bacteria living on their bodies, and when wet, they emit a very distinctive smell. This can be bad news if the smell appears while you’re using your air purifier – it may be a sign that there are germs stuck in your purifier’s filters, and they probably need to be replaced. Or, you know, it may actually be your dog that smells, in which case you may be interested in getting an air purifier specialized in removing pet odors.

If your air purifier smells bad after usage, check its filters first. They could be malfunctioning or just used up in case you bought the product second hand or you’ve been using it for a while. If that’s the case, it would be a good time to change them or have them replaced by the manufacturer if possible.

Sometimes the purifier can emit the smell of plastic as well. The heating up during usage may cause the plastic to start emitting its unpleasant aroma, which should generally go away with time. If it emits a permanent strong burning smell, however, there may be a serious defect and you should contact the manufacturer.

Smells coming out of your purifier may be a normal occurrence, a sign to change your filters, or a malfunctioning alert. The type of smell is crucial and will let you know whether and what you should do about it.

Air purifiers are products that require some maintenance, and their smell may well be a sign of how good they have been treated. Have this in mind and you will reduce the chance of bad odors in your living space to a minimum.

If you would like to know more about air purifiers, take a look at the other posts on our blog.